I refer to an important speech by Tengku Razaleigh Hamzah have as part of the in the 2007 Za’ba Lecture Series on last month. In my opinion, that speech should be widely disseminated and made available to all politicians, policy-makers and leaders of business and civil service organisations.

In his speech, Ku Li rightly emphasised that the NEP was only a temporary ‘safety net’ for Malays and others that may have benefitted from it. Its intention was not to provide permanent entitlements. Rather, those that have become successful should not rely on more incentives and privileges handed out by the government. This will not only weaken them but will also deny others that are in greater need of this assistance. What was especially noteworthy was his point that the ‘misuse of the assistance was delaying the process of producing learned and knowledgeable Malays’.

In fact, after over 30 years of NEP implementation, many Malays have already graduated and are more than capable of standing on their own feet without any safety net. Where are the large numbers of successful Malays to be found, some skeptics may ask? In my opinion, the easiest way to answer this is for the government to make available the statistics on bumiputera employment in the higher occupational categories and in the professions. Such a table showing bumiputera achievement was included in the Third Outline Perspective Plan document, 2001-2010.

That table showed that bumiputras already comprised 63.5% of the population for the professional and technical category of employment by the year 2000 and 37% for the administrative and managerial category in the same year. Similarly an accompanying table on registered professionals by ethnicity is very revealing.
By 1999, bumiputeras already comprised 28.9% of all registered professionals, and exceeded the 30% mark in five of the eight listed professions, viz, doctors, dentists, veterinary surgeons, surveyors and lawyers. 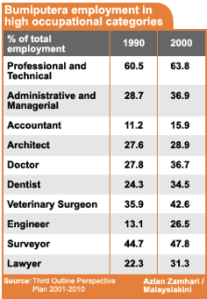 The table on the left shows the great strides that Malays have made as a result of the NEP, bearing in mind that they started from a comparatively low base. Since 1999, the government has poured even further enormous resources into Malay manpower training so we can expect even higher Malay representation in the most prestigious and well-paying professions. So what are the numbers for Malay achievement in the professional, technical, administrative, and managerial categories like today? What are they likely to be in the 2020 if current trends continue?

I sincerely feel that if this vital information were made publicly available, there will be less talk about Malay underachievement and less insecurity within the Malay community that they are losing out to the other races. In fact they should be justly proud that they are most probably the majority ethnic community in many highly paid and prestigious occupations.

Finally, I would like to suggest that both a copy of Ku Li’s speech and the chart above be widely disseminated so that our Prime Minister Abdullah Ahmad Badawi and many other political leaders do not need to harp on the continuance of the NEP, which can only frighten away many foreign investors and demoralise our younger non-Malay generations.

At the Malaysian Press Awards Night also last month, our Deputy Prime Minister Najib Abdul Razak said that an informed and knowledgeable society was instrumental in ensuring the success of a united nation, as envisaged by Vision 2020.

In line with this, the media can play an important role in garnering the right information to shape public perception of what the NEP has successfully achieved.