Last week, the international financial media carried the story that Canada intended to block the planned $5.3bn acquisition of Calgary-based Progress Energy Resources by Petronas. According to these reports, the country’s industry minister, Christian Paradis had issued a statement saying he had written to Petronas saying he was “not satisfied that the proposed investment is likely to be of net benefit to Canada”.

Much of the subsequent analysis has focused on questions related to Canada’s policy on foreign takeovers and its investment policy especially with regard to foreign state-owned entities. This should be of little interest to us.

Of greater interest to Malaysians should be how the Petronas takeover of Progress will benefit our country. Is it in our best interests? What are the pros and cons of this very expensive takeover? Let us always remember that the company belongs to all Malaysians, and not simply to the government of the day or a group of company directors.

Petronas has done well. Since its incorporation, Petronas has grown to be an integrated international oil and gas company with business interests in many countries. The group is engaged in a wide spectrum of petroleum activities, including upstream exploration and production of oil and gas to downstream oil refining. Oil trading is one of the key activities of the group.

As everyone knows, Petronas provides a substantial source of income with 45% of the government’s budget dependent on Petronas’ dividend. Is this focus on one single indicator of success – providing funds to run government – perhaps the reason why we are blinded to possible darker aspects of the company’s overall track record?

Any trading business – which Petronas partially is – has to observe some key principles to be successful. These include

1. Don’t try to predict the future
2. Flexibility in forward contracts as no one knows when the market will move
3. Having trading relationships that maximize your options

In recent years, questions have been raised as to whether our state owned oil business executes these or some other principles when it engages in trading. In addition, allegations have been made with regard to possible cronyism in some of its deals.

Perhaps the most serious allegation was the disclosure made by Jeffrey Kittingan in June 2008 that 80% of Petronas oil is not sold directly to the world market but is funneled through six option holders. Apparently these option holders or selling agents have obtained their supply from Petronas at well below market price for the next 20 to 30 years. 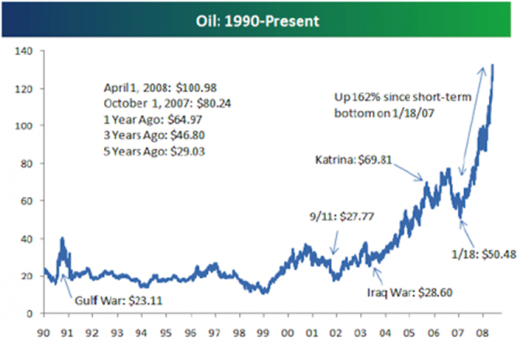 If this allegation proves to be correct then these profits would be much less than what could have been realized had the sales been conducted through open and more transparent forward sales.

When he initially made these allegations more than 4 years ago, Jeffrey Kittingan asked for a white paper or royal commission of enquiry to investigate this scandal. He also asked for a review of the Petronas agreements and to make Petronas open and transparent.

As far as I am aware, there has been no response from Petronas or the government on these concerns. If what amounts to a leakage from giving contracts without open tenders is taking place, then it is necessary that the issue be taken up during this coming election. What makes the trading strategy of Petronas inexplicable is that oil is a strategic and diminishing resource. Surely any oil trader is aware that the price trend in view of scarcity and lack of substitution can only be upwards, with the degree of price increase the only major risk. Also, it does not make business sense to tie up so much of forward sales with long term contracts since a mix of short, medium and long term
contracts is clearly the superior strategy.

Malaysia’s Transparency Record in 2010 scored below average in a study on transparency of revenue management of extractive industries that covered 41 countries. The country obtained 48.4 points compared with the study average of 51.8 out of the maximum of 100 points in a joint study by Revenue Watch Institute and Transparency International.

Malaysia sits in the group of countries with “partial revenue transparency”, that is countries which provide citizens with information about extractive sectors, yet show important transparency gaps in one or more specific categories of (the Revenue Watch Index).

Malaysia in fact falls below the average 50.1 points obtained by other Asia Pacific countries. 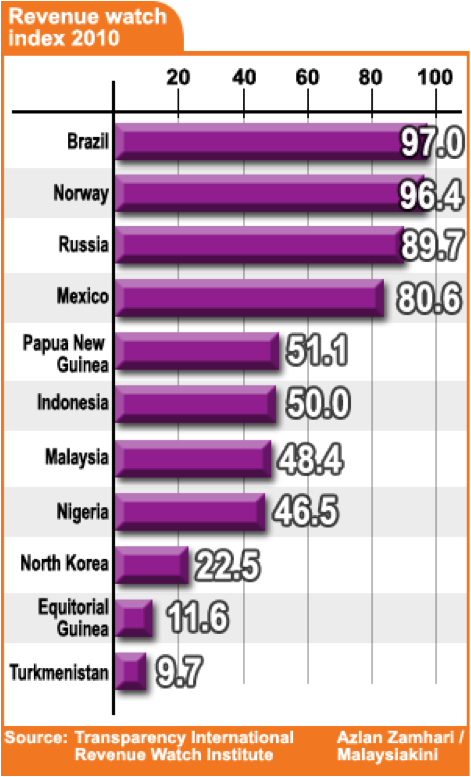 Malaysia is behind Indonesia, which scored an average 50 points, and also is behind Papua New Guinea, Trinidad and Tobago, Kazakhstan and even Timor Leste.
According to the study which rates countries on accessibility of information on contracts, licensing and government payments, as well as institutional structure compelling transparency, Malaysia drew a poor mark for access to information on contracts and licensing procedures.

Petronas Needs to be Accountable to the Country

According to the Petroleum Development Act 1974, Petronas is only accountable to the prime minister of the day, not even to Parliament. This is wrong.

In a recent speech Woo Wing Thye, a distinguished Professor of Economics who presently heads the Penang think tank, Penang Institute, pointed out the hazard that exists in the key role that Petronas plays in the country’s finances. According to Professor Woo, the world’s experience with state oil companies is that they would fail in the middle of a boom. Indonesia’s Pertamina failed in 1974 in the middle of the Opec boom and PetroMexico collapsed in the midst of the second Opec shock.

We need to take these cautionary words seriously. The first step to reform is to open up the account books of the company especially related to oil trading and to investigate the allegations of Mr. Jeffrey Kittingan.

Petronas belongs to all Malaysians and the majority of them are Bumiputeras who are better educated than before. They can see all these misuse of power, corruption and mismanagement and I believe they will know how to vote in the coming general election.

How water privatisation, not ‘piratisation’, can work
Hiring discrimination study a half-finished product
To Top